13 days from VENICE to rome 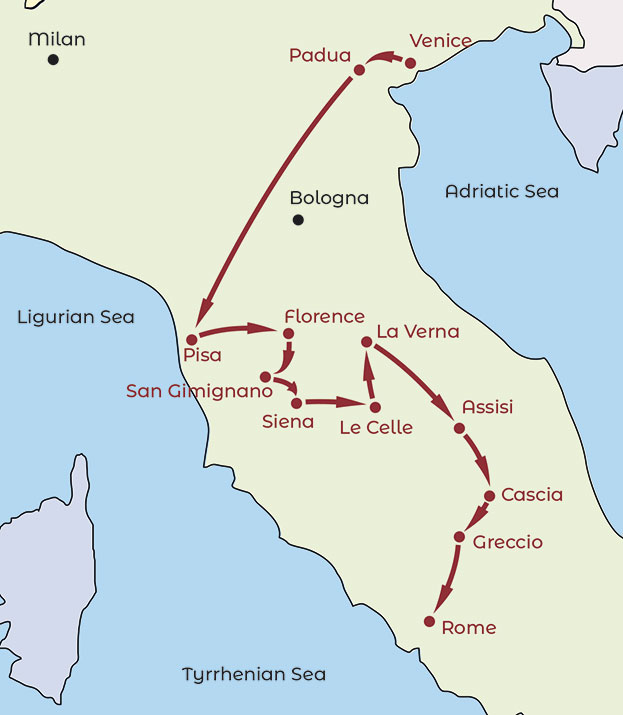 We arrive at the Marco Polo Airport and we transfer by speed boat to the unforgettable city of Venice, built on water, ready to discover on our own the narrow streets, the canals and the typical Gondolas. Free time. Dinner and overnight.

Early Mass at the St. Mark Basilica, then a guided visit to the Doge’s Palace. Free time again, in late afternoon we move to the nearby city of Padua. Dinner and overnight.

Early Mass at the St. Anthony Basilica, visit of the Church with the tomb of the Saint and transfer to Pisa. Lunch on the way. Visit of the Miracle’s Sq. in Pisa with the famous Leaning Tower and the Baptistery. Dinner and overnight.

After breakfast, two hours drive to Florence, the cradle of Renaissance, a paradise for art lovers, the city where the greatest artists worked : Leonardo da Vinci, Michelangelo, Raphael, Botticelli, Donatello and others. We’ll enjoy a guided tour including magnificent Franciscan Church of The Holy Cross or Santa Croce with the beautiful facade, which is a burial place of illustrious italianos, such as Michelangelo, Galileo and Machiavelli. Mass. Visit to the Academy to see some amazing works like the David by Michelangelo and many others. Then a walking tour through the city center and free time for an unforgettable shopping (in Florence, leather and gold are a must). Dinner, overnight.

From Florence we move to San Gimignano, famous all over the world for its medieval towers. Visit of this nice town and Mass. After lunch we move to the Medieval town of Siena, where we’ll visit St. Domenico Church with remains of St. Catherine, patron, along with St. Francis, of Italy. A nice walk through the narrow city streets will lead us the Duomo, beautiful Cathedral, and the famous Piazza del Campo (Campo’s Sq.), where each year the “Palio” horse race takes place, for your free time. Dinner, overnight Siena.

It’s time for us to know more about the life of St. Francis. From Siena we reach Le Celle, the first sanctuary built by the will of the Saint after his conversion and later we’ll discover the beautiful shrine of La Verna, where He received the gift of His stigmata. Two beautiful places, off the beaten tracks, for an unforgettable immersion into His life. Dinner and overnight in St. Mary of the Angels – Assisi.

After an early breakfast, we’ll spend the morning to see the Basilica of St. Mary of the Angels, the one which gave the name to the famous American city of Los Angeles. This is where St. Francis spent most of his life. This Basilica is made up of two structures, both of which you will visit. The first structure, the older, is the “Porziuncola”, which is where St. Francis founded his order of the Friar Minor (Franciscans). The second, is the “Transit Chapel”, which is the place of St. Francis’ death. During your time here, you will celebrate your private Mass. Then, the rest of the day to discover the hometown of St. Francis, the “Patron Saint of Animals and the Environment.” You will become captured by the atmosphere which didn’t change since St. Francis began his ministry, in the early 13th-century. We will see the St. Francis Basilica, then, with the help of a local guide, we’ll discover all the details of this famous church, visiting the tomb of St. Francis, and view a series of outstanding frescoes made by Giotto in the 13th century, depicting the life of the Saint. From there, we move to the church of St. Clare, the foundress of the Poor Clare Sisters. This Saint followed the teachings of St. Francis very closely by living a life of poverty and humility. Later, you can join the tour to the jewel of St. Damiano church, the first monastery of the Order of St. Clare where she spent most of her life or enjoy some free time on your own. Dinner and overnight in Assisi.

Early departure to Cascia, town of St. Rita. Visit and Mass to her sanctuary. After lunch, we go to Greccio, which is deeply linked to the life of St. Francis. Here we’ll visit the Sanctuary of the Nativity, the place where St. Francis, on the night of Christmas in 1223, represented for the first times the nativity with living figures. Bethlehem and Greccio are two inseparable names in the Christmas memories of every year because, if in Bethlehem there was the mystery of the divine incarnation of the Savior of the World, in Greccio, for the piety of St. Francis of Assisi, began, in a completely new form, its mystical re-enactment. Afterwards we drive south to Rome. Dinner and overnight.

This is the day we’ll meet His Holiness Pope Francis in His weekly Audience in St. Peter, with the chance to take Him a picture right in front of us! Free time and lunch.
This afternoon we depart for a “Christian Rome tour” which includes: the Basilica of St. Mary Major, one of the oldest shrines dedicated to the Blessed Virgin, a shrine that contains a relic from the manger of the infant Jesus, with our daily Mass; then the Basilica of St. John in Lateran, the Roman Cathedral, the former residence of the popes prior to their return to Rome in 1377; the Holy Stairs, the ones brought to Rome by St. Helena, mother of the Emperor Constantine, from the city of Jerusalem, along with fragments of the Holy Cross of Jesus that we’ll see in the nearby St. Cross in Jerusalem church. Dinner and overnight in Rome.

We’ll start our day with an early Mass in St. Peter Basilica, the biggest church in the world which was built on the site where St. Peter, the first Pope and Bishop of Rome, was martyred. It is here that you will view Michelangelo’s Pietà (Piety). This stunning marble sculpture depicts the Virgin Mary holding Christ after His crucifixion, dead, and removed off the cross before being placed in the tomb. Our morning will be dedicated to the visit of the famous Vatican Museums, seen every year by millions people, an ensemble of different museums mixing ancient Roman arts with Renaissance tapestries and frescoes, including the awesome Sistine Chapel by Michelangelo. Free lunch. In the afternoon, visit at St. Paul Outside the Walls, second biggest church in Rome, which houses the remains of St. Paul under its main altar; then we’ll visit the Three Fountains Abbey, where the Apostle Paul was martyred and where over the centuries different congregations of monks founded the monastery and where today many of them live in prayer and work, selling to visitors oil, honey, beer, and many products made by them. Dinner and overnight in Rome.

We start our day by visiting the famous Catacombs of St. Callixtus, underground cemeteries where the early Christians used to be buried, and where 16 popes and many martyrs were buried. Then we’ll move to the Sanctuary of the Divine Love, dedicated to the Virgin Mary. Then free time and a small city tour before reaching a picturesque restaurant for our farewell dinner offering typical lovely folk Italian music, awaiting us to sing along the singers “Arrivederci Roma”. Overnight in Rome.

This morning you will be accompanied by your Tour Manager to the airport and assisted with check in formality to board the flight home.