14 days from ROME to VENICE 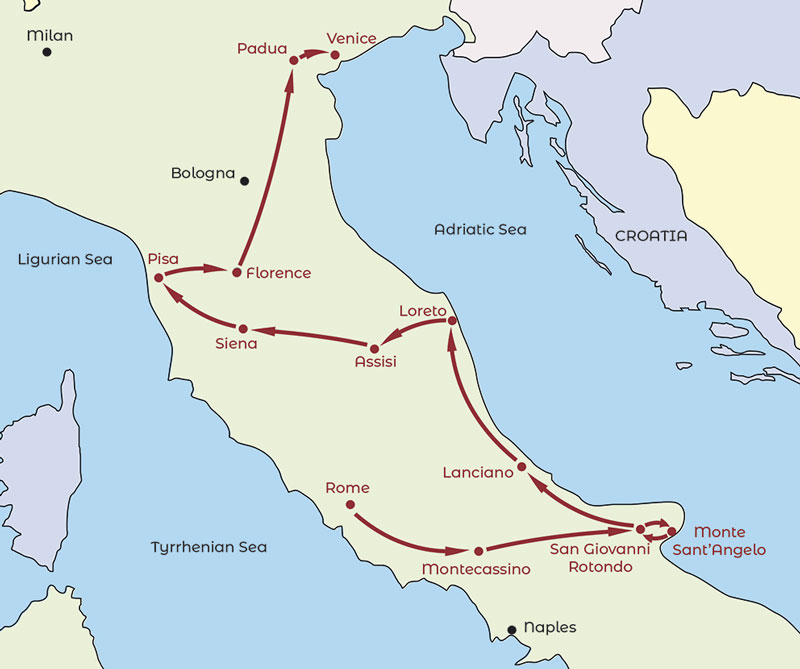 Arrive at the Da Vinci Airport in Rome. After passport control, meet your Tour Manager and board the private motor coach to start our Italian experience by visiting St. Paul Outside the Walls Basilica, the second largest in Rome, with the remains of the Saint, the only church with the portraits of all the popes, from Peter to Francis. Then time to relax and rest at the hotel. Dinner, overnight.

We’ll start our day with an early Mass in St. Peter Basilica, the biggest church in the world which was built on the site where St. Peter, the first Pope and Bishop of Rome, was martyred. It is here that you will view Michelangelo’s Pietà (Piety). This stunning marble sculpture depicts the Virgin Mary holding Christ after His crucifixion, dead, and removed off the cross before being placed in the tomb. Our morning will be dedicated to the visit of the famous Vatican Museums, seen every year by millions people, an ensemble of different museums mixing ancient Roman arts with Renaissance tapestries and frescoes, including the awesome Sistine Chapel by Michelangelo. Free lunch. This afternoon we depart for a “Christian Rome tour” which includes: the Basilica of St. Mary Major, one of the oldest shrines dedicated to the Blessed Virgin, a shrine that contains a relic from the manger of the infant Jesus, with our daily Mass; then the Basilica of St. John in Lateran, the Roman Cathedral, the former residence of the popes prior to their return to Rome in 1377; the Holy Stairs, the ones brought to Rome by St. Helena, mother of the Emperor Constantine, from the city of Jerusalem, along with fragments of the Holy Cross of Jesus that we’ll see in the nearby St. Cross in Jerusalem church. Dinner and overnight in Rome.

This is the day we’ll meet His Holiness Pope Francis in His weekly Audience in St. Peter, with the chance to take Him a picture right in front of us! Free time and lunch. In the afternoon we’ll move to the Sanctuary of the Divine Love, dedicated to the Virgin Mary. Then a small city tour before reaching a picturesque restaurant for our farewell dinner offering typical lovely folk Italian music, awaiting us to sing along the singers “Arrivederci Roma”. Overnight in Rome.

Early departure southward to the Abbey of Montecassino, an ancient sanctuary built in the 6th century by St. Benedict, founder of the Friars Order with His name. Mass in this extraordinary shrine visited by pilgrims coming from all over the world. After lunch, we take the Highway southward to another important Italian sanctuary, San Giovanni Rotondo. Dinner and overnight.

Early Mass to the old church where the Saint used to confess people. Today you will visit the tomb of Padre Pio, today conserved in a beautiful gloden “cripta” , tour the sanctuary and see the crucifix from which he received the stigmata in 1918. You will see the confessional where Padre Pio spent innumerable hours with a multitude of pilgrims. In late morning, we move to the nearby town of St. Angel Mount, for a visit to the stunning Grotto of Michael the Archangel. Six different popes, St Francis and other saints have knelt in prayer at this grotto, seeking the protection of St Michael. A panoramic view of the sea and the surrounding countryside awaits you at this most celebrated shrine of early Christianity, a shrine consecrated by St Michael himself in 490. Return to San Giovanni for devotions, reflection. Overnight.

This journey today takes you to Lanciano to see the eighth-century Eucharistic Miracle in the little Church of Lagontial. After expressing doubts about Christ’s true presence in the consecrated host, a monk saw the host in his hands changing into flesh and wine changing into blood. Then we follow the Adriatic coast to the great Marian shrine of Loreto to visit the Holy House of Nazareth and the beautiful Sanctuary Madonna of Loreto. More than 50 popes have made a pilgrimage to the house which, according to faith, was transported by angels to this hill in central Italy in 1294. According to tradition, this is the house in which Mary prayed the Magnificat, in which Jesus grew to manhood, and in which the Holy Family lived. Mass at the Shrine in Loreto, then transfer for dinner and overnight.

From the town of Loreto, we move through the beautiful countryside to reach another magic shrine : Assisi, to see the Basilica of St. Mary of the Angels, the one which gave the name to the famous American city of Los Angeles. This is where St. Francis spent most of his life. This Basilica is made up of two structures, both of which you will visit. The first structure, the older, is the “Porziuncola”, which is where St. Francis founded his order of the Friar Minor (Franciscans). The second, is the “Transit Chapel”, which is the place of St. Francis’ death. During your time here, you will have the opportunity to celebrate your private Mass and visit the beautiful Rose Garden where St. Francis and other friars lived, as well as the cave where the Saint retired to pray. We’ll spend our afternoon to visit the peaceful monastery of St. Damiano, the first monastery of the Order of St. Clare where she spent most of her life. Free time for shopping. Dinner and overnight in Assisi.

Enjoy an early breakfast, followed by a full day to discover the hometown of St. Francis, the “Patron Saint of Animals and the Environment.” You will become captured by the atmosphere which didn’t change since St. Francis began his ministry, in the early 13th-century. We will start our day with an early Mass in one of the many chapels in the St. Francis Basilica, then, with the help of a local guide, we’ll discover all the details of this famous church, visiting the tomb of St. Francis, and view a series of outstanding frescoes made by Giotto in the 13th century, depicting the life of the Saint. From there, we move to the church of St. Clare, the founderess of the Poor Clare Sisters. This Saint followed the teachings of St. Francis very closely by living a life of poverty and humility. In the afternoon, you can enjoy some free time on your own. Dinner and overnight in Assisi.

Today we move to the Medieval town of Siena, where we’ll visit St. Domenico Church with remains of St. Catherine, patron, along with St. Francis, of Italy. Mass. A nice walk through the narrow city streets will lead us to the Duomo, beautiful Cathedral, and the famous Piazza del Campo ( Campo’s Sq. ), where each year the Palio horse race takes place, for your free time and lunch. In the afternoon another important italian city is waiting our pictures : Pisa with its Leaning Tower and Miracle’s Sq. Dinner and overnight.

After breakfast, two hours drive to Florence, the cradle of Renaissance, a paradise for art lovers, the city where the greatest artists worked : Leonardo da Vinci, Michelangelo, Raphael, Botticelli, Donatello and others. We’ll enjoy a guided tour including magnificent Franciscan Church of The Holy Cross or Santa Croce with the beautiful facade, which is a burial place of nobles, such as Michelangelo, Galileo and Machiavelli. Mass. Visit to the Academy to see some amazing works like the David by Michelangelo and many others. Then a walking tour through the city center and free time for an unforgettable shopping. (in Florence, leather and gold are a must). Dinner, overnight.

Early departure heading to Padua, city of St. Anthony. Mass in His Sanctuary, one of the most visited Italian shrines. After lunch, we soon arrive in Venice, known around the world for its unique architecture, fully built on water. We’ll leave our coach and proceed through a boat to reach our hotel. Free time. Dinner, overnight.

A full day to discover this fantastic city. First, Mass at the St. Mark Basilica, then guided visit to the Doge’s Palaces and the rest of the day will be free to enjoy the unforgettable atmosphere that only Venice can give you. Optional visit to a Murano Glass factory as well as a Gondola (boat) ride through the city canals. Dinner, overnight.

This morning you will be accompanied by your Tour Manager to the airport and assisted with check in formality to board the flight home.