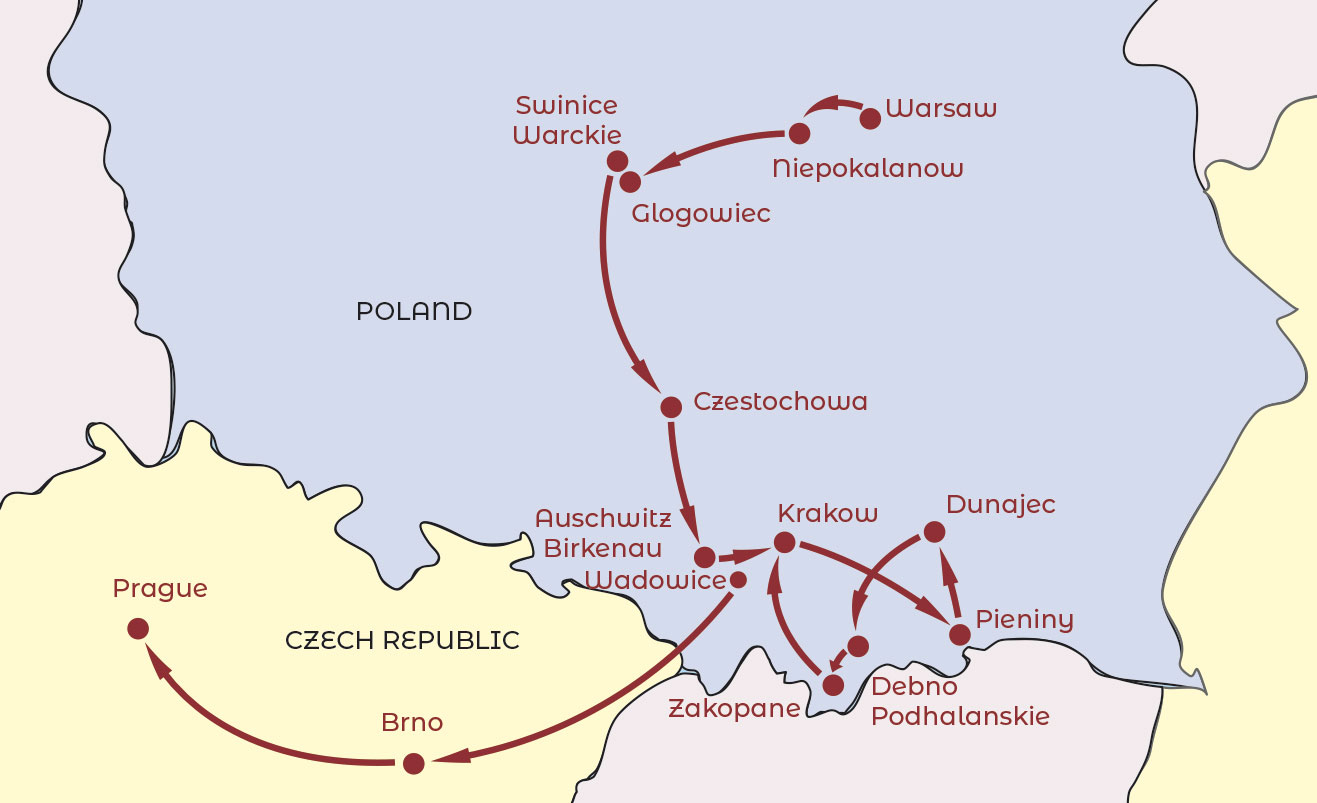 Take your flight. Meals will be served on board

Meeting with the tour leader and transfer by a coach to the hotel in Warsaw. Check-in at the hotel. Orientation tour according to arrival time. Dinner and overnight in Warsaw.

Breakfast at the hotel. Guided tour of Warsaw: Lazienkowski Park (Royal Bath Park) with the Frederic Chopin monument, The Warsaw Ghetto and Umschlagplatz – thousands of The Jews were deported to the concentration camps from here – the Tomb of the Unknown Soldier, the Palace of Culture and Science, Krakowskie Przedmiescie Street, the Old Town (a UNESCO World Heritage Site). The Castle (without going inside) and St. John’s Cathedral. The Old Town was completely destroyed during World War II and reconstructed thanks to the commitment of the Polish nation. Lunch in a restaurant. Visiting Saint Stanislaw Kostka’s Church. It’s the burial site of Father Jerzy Popieluszko, who was kidnapped and brutally murdered by communist militia officers in 1984. (There will be a mass to attend there.) The theme of this part of the journey is: ‘The Church during Communism’.
Dinner and overnight in Warsaw.

Departure for Niepokalanow. Sightseeing in the Sanctuary of the Immaculate Virgin Mary, which was founded by Father Maximllian Kolbe. Lunch in Sochaczew near Niepokalanow. After lunch departure for Glogowiec and Swinice Warckie, two places important to St. Faustina Kowalska. Glogowiec was where she was born, and Swinice Warckie was where she was baptized. Late afternoon departure for Czestochowa. Dinner and overnight in Czestochowa.

Guided tour of the most important pilgrimage place in Poland – the monastery in Czestochowa: Jasna Gora with the miraculous icon of the Virgin Mary – the Black Madonna. Lunch at a traditional restaurant in Czestochowa. Afternoon departure for Auschwitz – Birkenau. Guided tour of the area of the Former German Nazi Concentration and Extermination Camp (1940-1945) Auschwitz-Birkenau. The camp was established by Germans in 1940, in the suburbs of Oswiecim, a Polish city that was annexed to the Third Reich by the Nazis. Its name was changed to Auschwitz, which also became the name of Konzentrationslager Auschwitz. Today there is a museum on the territory of the camp, the place is a World Heritage Site of The UNESCO. The visit includes the Auschwitz I and Auschwitz II-Birkenau camps. Departure for Krakow. Dinner and overnight in Krakow.

Krakow – the heart of Poland, Kazimierz – Jewish district and Wieliczca Salt Mine

Guided tour of Krakow. The Wawel Hill with the castle (optional sightseeing inside), its beautiful courtyard and the Cathedral (sightseeing inside). Romanesque, Gothic, Renaissance and Baroque architecture of the Old Town (Stare Miasto), the biggest market square in Europe (Rynek Glowny), the Town Hall, Collegium Maius, an ancient building belonging to the Jagiellonian University, the Cloth Hall (Sukiennice), Saint Mary’s Church (Kosciol Mariacki – sightseeing inside) with Veit Stoss’s famous altar. Walking to the antique walls of the Old Town through Florianska Gate and to the Barbican. Sightseeing will include a multimedia presentation about the story of amber called “Polish Gold”. In 1978, Krakow’s Old town was inscribed on UNESCO’s World Heritage List. Lunch at a restaurant in Krakow. After lunch visit of the former Jewish district of Kazimierz. This part of Krakow was the centre of the Jewish community’s religious and social life until the deportations during the Nazi occupation (sightseeing inside 1 or 2 synagogues). A short stop in front of Schindler’s Factory on the way to the Salt Mine in Wieliczka. Guided tour in the Wieliczka Salt Mine, one of the oldest salt mines in the world. Magnificent chambers chiselled out in rock salt (the Chapel of St. Kinga is the most brilliant one). Amazing underground saline lakes, majestic timber constructions and unique statues sculpted in salt. Almost 3 kilometers of meandering corridors, 800 steps to climb of which 350 have to be descended to reach the depth of 135 meters underground. The “Wieliczka” Salt Mine is one of the most valuable monuments of material and spiritual culture in Poland. Each year it is visited by more than one million tourists from all over the world. It is on the UNESCO’s World Cultural and Natural Heritage List. Dinner at the traditional Polish restaurant in Wieliczka combined with a folk music concert. Return to the hotel and an overnight stay in Krakow.

Departure by coach for Sromowce Wyzne. Sailing on traditional wooden rafts down The Dunajec River, across The Pieniny National Park. Lunch at a restaurant in Szczawnica (or Wadowice or Zakopane, if there is no raft trip). Transfer to Debno Podhalanskie. Visit of the wooden Gothic church: one of the wooden churches on the south of Poland listed as World Heritage Site by UNESCO. Afternoon transfer to Zakopane and visit: it will include visiting the town and riding the funicular railway or chairlift up to Gubalowka for a beautiful view over the Tatra Mountains. Holy mass in Zakopane. Departure to Krakow. Dinner and overnight in Krakow.

Departure for the Sanctuary of Divine Mercy in Lagiewniki (a district in Krakow) after breakfast. Blessed are the merciful, for they will be shown mercy’. Visiting the monastery in Lagiewniki. The Sanctuary of Divine Mercy is where Saint Faustina Kowalska lived and died. This Monastery was proclaimed ‘The center of Divine Mercy’ by Pope John Paul II during his stay in Poland in 2002. On Divine Mercy Sunday (a week after Easter), thousands of people come there to participate in masses and pray in the antique church where Saint Faustina Kowalska (founder of the cult of Divine Mercy) was buried. Departure for Kalwaria Zebrzydowska. Visit at the Bernardine Monastery in Kalwaria, the 3rd most famous shrine in Poland. The whole Mannerist complex (including the sanctuary and a park) is also listed as a World Heritage site by UNESCO. Departure for Wadowice, where John Paul II was born in 1920. Lunch at a restaurant in Wadowice. Visiting the Pope’s house and the church where he was baptized. Departure to Brno. Arrival to Brno, for dinner and overnight.

Visit of Brno with a local guide. Lunch and departure to Prague. Arrival and check-in. Dinner and overnight in Prague.

The Prague Castle, its surroundings and the Little Quarter

Going up to the Castle Hill by coach. Sightseeing starts in the Starahov Monastery which was founded in 1140 by King Vladislav II. Sightseeing at St. George’s Basilica, the Church of the House of Nazareth, Prague’s Loreto (entrance). Visit of the Castle and Cathedral. Passage down the Castle Steps towards the Little Quarter. Lunch. Sightseeing in the Little Quarter, starting with the church of Our Lady Victorious, with the famous statue of the Infant Jesus of Prague. Charles’ Bridge is considered one of the most important Bohemian constructions from medieval times. The Little Quarter is surrounded by the Castle from the North and the Petrin Hill from the South. St. Nicholas’ Church with a 79- meter bell tower is located in the Old Town’s centre. Dinner at a restaurant in the city center or on a boat on the Vltava River (with supplement). Return to the hotel. Overnight in Prague.

The Old Town, the Jewish Quarter and the New Town – Sviata Hora – Prague

Sightseeing in Prague: the Old Town with its Market Square and Municipal House, the Church of Our Lady of Týn, St. James’ Basilica, the longest church in this area, the Powder Tower. All these monuments are examples of Prague’s magnificent architecture, like the former Jewish Quarter, which dates back to the 11th century situated in the center of the Old Town. The New Town was founded by Charles IV of Luxembourg in the 19th century. We will also view the famous Wenceslas Square, where Czech citizens welcomed major political changes in the years: 1918, 1945, 1968 and 1989. Lunch at a restaurant. Departure for Svata Hora: the Holy Hill. A sanctuary from 1260 is located there. Now it is under Jesuits’ protection. Return to Prague for dinner and overnight.

After breakfast, departure. You’ll be assisted for your check-in formalities.

Any cookies that may not be particularly necessary for the website to function and is used specifically to collect user personal data via analytics, ads, other embedded contents are termed as non-necessary cookies. It is mandatory to procure user consent prior to running these cookies on your website.