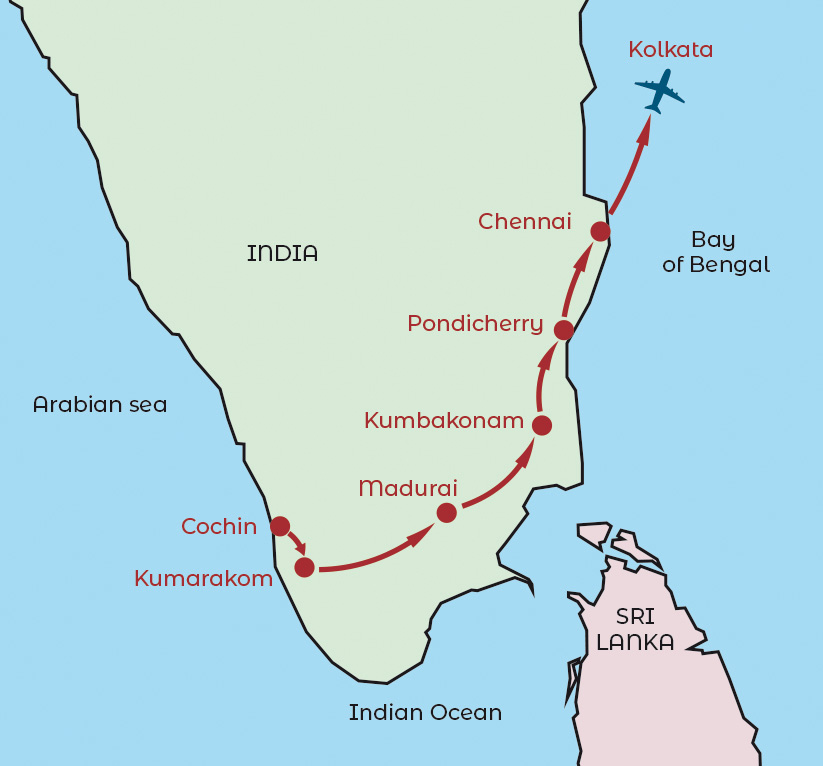 Take your departure flight. Your meals will be served on board.

Morning proceed to visit St.Thomas Shrine in Malayattoor which is one of the oldest Catholic churches in India. Evening free to relax. Dinner and overnight in Cochin.

Morning after breakfast you will be driven to Madurai. Upon arrival check in at hotel. Dinner and overnight in Madurai.

After the breakfast, we shall drive to Velankanni. Visit famous Velankanni Church, which is also known as The Church of Our Lady of Health. Return to Kumbakonam for overnight stay at the hotel.

After breakfast at the hotel, drive to Pondicherry. Upon arrival, check in at hotel. Later visit Church of the sacred Heart of Jesus, Aurbindo ashram & French colony. Dinner and overnight in Pondicherry.

Chennai to Kolkata (By flight)

In time transfer to Chennai airport to catch your onward flight to Kolkata. Upon arrival at Kolkata, meet our representative who will assist you and transfer to the hotel. Later we will go for the orientation tour of the Kolkata city. Start your tour with Dalhousie Square (BBD Bagh) which is the heart of Kolkata and where many famous buildings, housing, important businesses and banks are located. Next, drive through Howrah Bridge, one of four on the Hooghly River and famous symbol of Kolkata and West Bengal. Continue your drive to Victoria Memorial, Kolkata’s imposing white marble dream inaugurated by the Prince of Wales in 1921. It is a huge white-marble structure and the most enduring of remains of the British Raj in India.
If time permits, you may proceed to visit St. John’s Church, the third oldest church of Kolkata which became the principal Cathedral of Calcutta in 1815. Then visit St. Paul’s Cathedral, acknowledged as the first Episcopal Church of the eastern world. Dinner and overnight in Kolkata.

Morning after breakfast, proceed to visit St. Mother Teresa’s House. It is a holy place of pilgrimage and reverence for those who are searching a more meaningful existence. It was established by St. Mother Teresa in 1950 with the purpose of selfless service to mankind. Visit St. Mother Teresa’s Tomb. She was buried on the ground floor of the Mother House on 13th September, 1997. Her tomb has become a place of pilgrimage and quiet meditation to people of all creeds. We also visit the Museum, close to Mother’s tomb, a small exhibition opened in 2005, entitled ‘Mother Teresa’s Life, Spirit and Message’. The exhibition includes many of St. Mother Teresa’s handwritten letters, spiritual exhortations and her few personal belongings – sari, sandals, crucifix. Free time. Dinner and overnight in Kolkata.
* Mother house remains closed on Thursday & 26th December

Morning after breakfast, proceed to visit Cathedral of the Most Holy Rosary, built in the late 18th century, the only remaining architectural relic of Kolkata’s lesser-known Portuguese past. Commonly called the Portuguese Church today, it is currently the seat of the Archbishop of the Roman Catholic Archdiocese of Kolkata. Free time. Dinner and overnight in Kolkata.

In time transfer to Kolkata airport to catch your onward flight to your destination. You’ll be assisted for your check-in formalities.